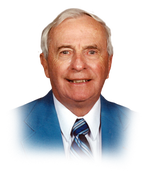 At home on May 18, 2020 at the age of 95 years. Beloved husband of the late Ruth Bernice (1996). Sadly predeceased by daughter Janice (2011) and her husband Gary Semeniuk (2015). Loving father of Fred and wife Karen. Beloved grandfather to his only grandchildren - Lindsey and Jonathan. Son of the late C. Fred (1971) and Winnifred Waugh (1983). Brother of William Waugh (2016) and wife Madelyn and the late Louise Barth (1973). Dear brother-in-law to Harold (1993) and Marion (2004) Hollister, Sr. Mary Arthur (2014), Austin (2000) and Agnes Renaud, Dick (2013) and Betty (2016) Ennis, Theresa (2013) and Karl Klinck, Erwin (1993) and Angie (1995) Renaud and Norm and Sofia Renaud. Harrison was widely known and respected within the transportation industry. He was Owner/President of Lyons Transport and Merchants Speedy Delivery. He was a Charter Member of the Windsor Transportation Club. Harrison was an active 52 year member and Past Grand Knight of Knights of Columbus Holy Family Council 4386. He was a Life Member at Essex Golf and Country Club. He was fortunate to have spent 40 plus years wintering in his second home in Ft. Lauderdale, Florida where he made many friends who will also miss him greatly.

A private family service at Families First Funeral Home will be held on Monday, May 25th immediately followed by interment at Heavenly Rest Cemetery.

Due to the current pandemic, a Celebration of Life will be held at a later date.

Click here to view how to support others during self isolation from home.

This obituary is protected by copyright by Families First. Proudly Serving the Community of Windsor. Families First is located in the province of Ontario, Canada.