To share your memory on the wall of Hugh Thompson, sign in using one of the following options:

Born and raised in Toronto, Dad graduated first in his class at The University of Toronto (Chemical Engineering), and played varsity soccer for U of T. During WW2 Dad served as a CANLOAN officer (Canadian officer on loan to The British Army) serving in The Netherlands, Belgium, and northern France.

Dad was well respected by those who knew him. His strong determination, loyalty, compassionate heart, wise counsel, and quick wit were traits admired by those he encountered along his journey.

He was a man of integrity which served him well, as a husband, father, grandfather, friend, officer in WW2, and a successful career at Hiram Walker & Sons Ltd.

Special thanks to Dr. Jeff Price and Huron Lodge, especially the Maple team. If you so desire, donations to the Alzheimer’s Society would be appreciated by the family.

Receive notifications about information and event scheduling for Hugh

Donations are being accepted for: ALZHEIMER SOCIETY OF WINDSOR AND ESSEX COUNTY.

We encourage you to share your most beloved memories of Hugh here, so that the family and other loved ones can always see it. You can upload cherished photographs, or share your favorite stories, and can even comment on those shared by others.

Posted Aug 10, 2020 at 02:16pm
Sincere condolences to Ian, Keith, and families. Sue and I are very sorry to hear of Hugh's passing, we remember him fondly and know how large a role he played in your lives. I recall many friendly chats in your family room with Hugh and Joy, and I understand how difficult it is to lose a parent. I hope you will all be comforted by the many fond memories you have of your dad (and mom), and that you can take some solace in knowing you had more time with him than most; 97 years is an amazing lifespan. I know my dad enjoyed and respected your dad from his Hiram Walker days. Hugh was a kind, intelligent, thoughtful man, and I see many of those traits in the both of you. Take good care, we wish you comfort as you mourn the loss of Hugh.
Sincerely, Sue and Barry Hogan, North Vancouver.
Comment Share
Share via:
PM

Posted Aug 10, 2020 at 07:37am
I am very sorry to hear about the passing of your father Ian. I know from the manner in which you spoke he was a great influence on your life. I mentioned to my wife Inge (whom as you know was born in Holland) that he was on the ground in Europe in WWII and was one of the young Canadian man whom liberated her country. She wanted me to pass along her condolensces as well as thanks for his service.

Posted Aug 09, 2020 at 06:58pm
With condolences to Keith and the Thompson family
Keith,
Hugh, I think, must be the last or one of the last of the old guard at Hiram Walker. To me, his work there was a bit like Allstate...you knew your were in "good hands". We were not going to run out of Canadian Club or Ballantine's on Hugh's watch! I found your Dad always had a friendly smile and a patient approach to explaining things.
Again, condolences and I regret I am unable to attend tomorrow.
Regards Al Fleming.
Comment Share
Share via:
LC

Sorry to learn of your fathers recent passing. Will be thinking and praying for your family during this sorrowful time. God bless. 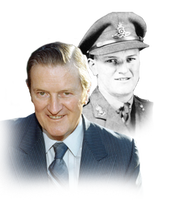