To share your memory on the wall of Mary Lou Spickett, sign in using one of the following options:

Sadly, Mary Lou lost Ernie from a sudden heart attack in 1990; far too young to become a widow. At that time she was working at the University of Windsor Leddy Library and retired in 1995. About then, she got the travel bug taking her to places like Ireland, the east coast of Canada, Alaska, the Hawaiian Islands, the island of Bequia, Isla Mujeres, Mexico, Aruba, Vancouver and Victoria, BC and took several cruises. She had a keen sense of adventure, but also loved being at home in Windsor, especially during the baseball season when she could turn on a Tigers game. Mary Lou loved hosting all of her family for celebrations and visits. There was always the perfect balance of good food and chaos that kept them coming back. Her strong faith guided her through the last difficult months of her life. She will be missed, but importantly her family are grateful for the time they had with her as she provided strength, wise counsel and a lot of fun. Her typical toast at gatherings reminded us “We are all so lucky”.

We will be forever grateful to our sister Leslie Spickett for the love, support and care she provided to Mary Lou throughout the years especially in this last year of her life when her needs were the greatest.

We also appreciate the many angels who provided care, in particular, Michelle from Bayshore who was with Mary Lou for several years. More recently, we appreciate the kindness and care provided by Moragh, Anita, Sophia, Erica, Lori and others from the Hospice team, enabling her to stay at home as she completed her journey with us. Thank-you.

If you so desire, donations to the Downtown Mission and the Hospice of Windsor and Essex County would be appreciated. Arrangements entrusted to Families First, 3260 Dougall Ave., South Windsor, 519-969-5841. Due to the current restrictions on public gatherings, a private family visitation and cremation were held. A Celebration of Mary Lou's Life will follow when circumstances allow.
Read Less

Receive notifications about information and event scheduling for Mary Lou

Donations are being accepted for:
THE HOSPICE OF WINDSOR AND ESSEX COUNTY INC. THE UNITED CHURCH DOWNTOWN MISSION OF WINDSOR INC.

We encourage you to share your most beloved memories of Mary Lou here, so that the family and other loved ones can always see it. You can upload cherished photographs, or share your favorite stories, and can even comment on those shared by others.

Posted Jun 16, 2020 at 09:36am
Dear Lisa and David:
My condolences in the passing of your dear Mother. I am sure you have many wonderful memories of your time with her. I hope they bring you great solace in the years to come. Bless you and your beautiful large family.
Comment Share
Share via:
CH

Posted Jun 16, 2020 at 09:33am
Dear Leslie:
So sorry to hear of the passing of your dear Mother. i know how close you were to her. Your loving care each Thursday when you took meals home to her from the golf course showed your wonderful dedication to her. I hope you carry many good memories of your time with her forever. Love and Peace to your family.
Comment Share
Share via:
MB

Posted Jun 15, 2020 at 10:11am
Dear Matt, Donna and family,
So very sorry to hear of your Mom's passing. We remember her from the family gatherings at your home and backyard.
I am sure there are many, many memories from your large family gatherings to comfort you in coping with her passing.
She lived a long life and will continue to watch over all of you.
With our deepest sympathy, Margo and Moe
Comment Share
Share via:
BM

Posted Jun 15, 2020 at 08:25am
Dear Leslie - So sorry to read about your beloved mom. I met her a few times at the Assumption pasta fundraiser nights and soon realized where your abundant kindness and beautiful smile came from. Prayers are on their way dear Leslie. Love Suzanne De Froy 🌷
Comment Share
Share via: 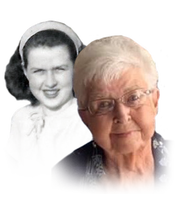